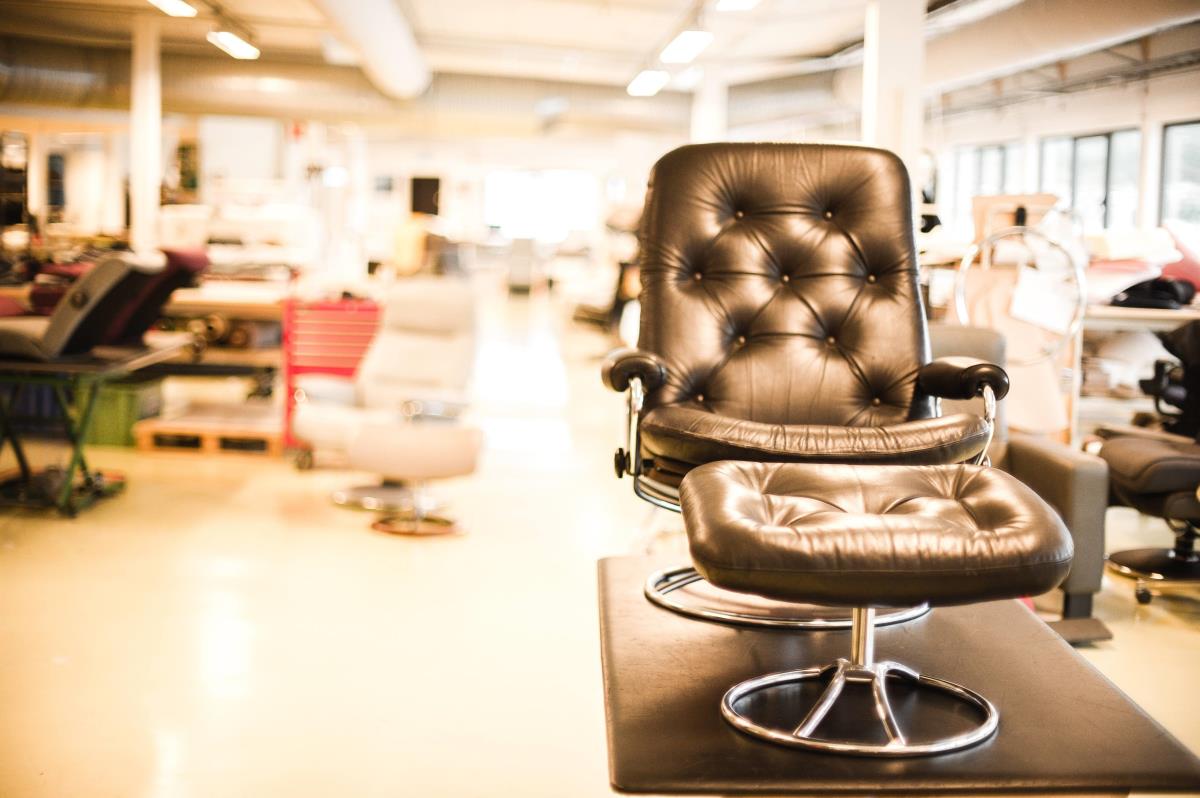 Stressless® was introduced in 1971, as the first recliner designed to meet your body's need for movement and support when seated. The characteristic TV-recliner was a revolution in comfort and functionality, and soon became an international success.

Offering patented features you won't find on other recliners, from the Glide™ system that follows your slightest movements, to the Plus™-system for correct neck and lumbar support in every position, Stressless® is still known as the ultimate recliner.

1971: The first Stressless® is introduced
The first Stressless® was launched in Norway and immediately became the first real TV chair. You could lean backwards and rest, watch TV in comfort or turn around to face the coffee table with one easy movement. The patented sliding system attracted a great deal of attention and is still unique.

1983: Stressless® no. 500.000 was registered
Export exceeded 100 million Norwegian Kroner and the 500 000th Stressless® recliner was produced. The company's success in the export market was rewarded in 1983 with Ekornes being awarded the Norwegian Export Prize

1989: Stressless appears in the Universal movie "Back to the Future II".

1991: Launch of the patented Plus™ System
The patented Plus™ system was launched, with its pioneering automatic adjustment of the headrest and lumbar support. At last, people could read and watch TV leaning back in a recliner. Stressless® strengthened its position as the most comfortable swivel recliner.

1996: Same design in several sizes
Ekornes started to make the same design in two or three sizes. Stressless® was the first recliner in the market to take into account that people with different builds have to have different chair sizes in order to sit comfortably.

1999: Unique read and sleep function
The sleep function is an extension of the unique Plus™ System. The user can choose whether the headrest is in the reading or sleeping position when the chair is reclined. Once more Stressless® was the first to introduce a pioneering innovation.

When Pope John Paul II visited Mexico, General Motors constructed a specially made 1998 model Cadillac DeVille known as the "Popemobile". A white Stressless® was mounted in the car, to be used as a throne for the Pope.

Stressless® Savannah was given the "Chair of the year" award at the Birmingham Furniture Show.

2003: Home theatre
A tailor-made home theatre set-up based on Stressless® was launched. The concept was very well received throughout the world.

2004: New factory and redesign of logo
The Ekornes factory at Ikornnes was extended by 30,000 square metres to accommodate the continual increase of Stressless® sales. The factory is one of the most modern furniture factories in the world. Through extensive use of advanced robotics, the production capacity increased substantially. 2004 was also the year when the redesigned Stressless® logo was introduced.

2005: Introduction of low-back Stressless® sofas
Stressless® Paradise was launched as low-back sofa with full Stressless® functions. The goal over time is to convert all Ekornes sofas into Stressless® sofas. At the same time, Ekornes Fairytale was introduced, a roomy and comfortable corner solution which also can be used separately. Both models quickly became popular worldwide.

2006:
Stressless® Jazz is launched at the annual furniture fair in Ålesund. This design was inspired by the Stressless® Original, the visible steel giving it a more contemporary look compared to other models. 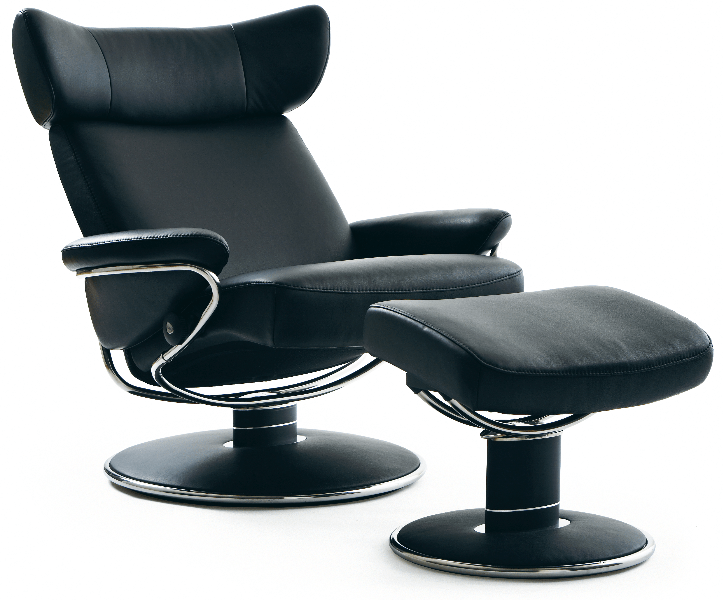 2008:
Stressless® Jazz got the "Award for Design Excellence" from the Norwegian Design Council.

Stressless Original appears in the movie "Music and Lyrics" from Warner Bros.

2009:
A new design of Stressless® sofas with ErgoAdapt-system are launched. ErgoAdapt is a built-in system, with a discreet tilting mechanism that makes the sofa's seat automatically adjust to your body, providing a perfect sitting angle or sleeping position. Sofas with this system are available from early 2010.

2010:
New research shows that more than 90% of the Norwegian population know the Stressless® brand.

The design programme Stressless® Design Online is launched. This web-based tool allows you to see all Stressless® models in 3D, build your own combinations and place them in a room-design of your own.

2011:
Ekornes celebrates the 40 years' anniversary for Stressless®. Since the introduction in 1971, more than 6.5 million Stressless® seats are sold, and Stressless® is a registered trademark in over 60 countries. There are approximately 2,500 Stressless® dealers world-wide.

The world's first sewing robot is put to work at the Stressless® factory, to sew covers for the base of models Stressless® Jazz and Blues.

2012:
Ekornes opens a production facility for Stressless® in Morganton, NC, USA. This factory receives parts from Norway and makes Stressless® sofas for the North American market to shorten delivery times. 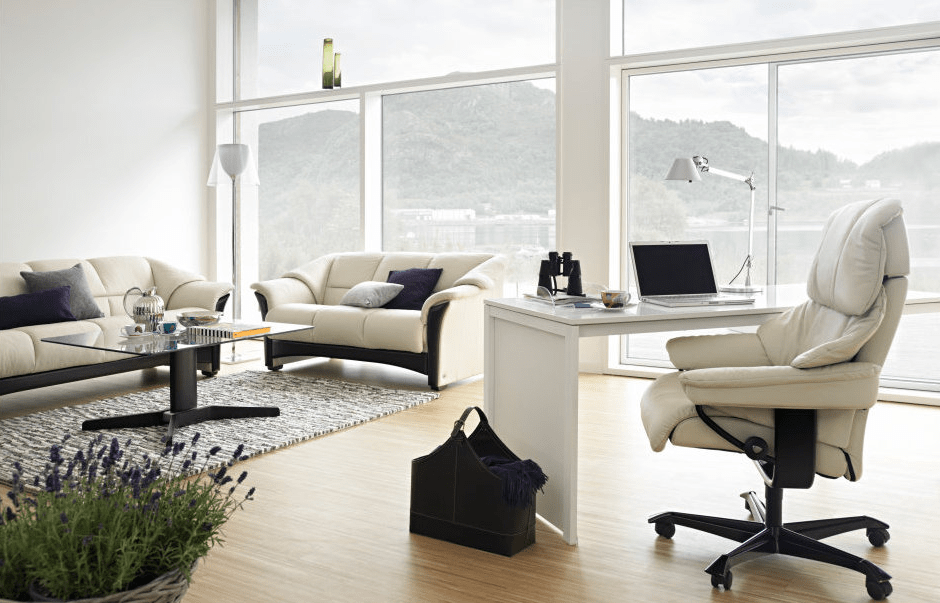 2013:
A new communication concept for Stressless® is launched, to strengthen Stressless®' position as the leading comfort furniture brand. The new concept is developed for use on print, studios, TV and web.

A new and improved version of Stressless® Design Online is launched.

Stressless® recliners with Star base are launched. The first designs, Stressless® Metro and Stressless® City, have the same steel frame as Stressless® Original and a sleek and elegant design while retaining all the Stressless® benefits and features. 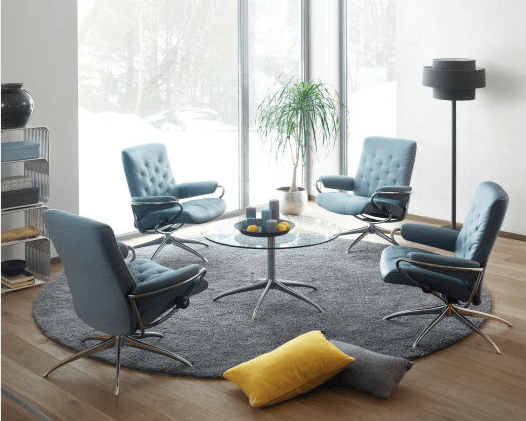 2014:
The innovative BalanceAdapt™ system is introduced on a new line of Stressless® sofas. The built-in system allows the seat's back and seat to adjust the position automatically according to the movements of the body, and the soft rocking motion provides an added dimension to the comfort experience.

Two Stressless® chairs with a new base called "Signature" are launched. This base combine wood and aluminium and features the BalanceAdapt™-system. The subtle and soft rocking motion increases your comfort in any position and also ensures that the sitting angle adjusts even further.

A brand-new collection called Stressless® YOU is launched. This collection offers chairs and sofas that are minimalistic and precise in expression, yet uncompromisingly comfortable.

The production of Stressless® chairs is presented in the 11 th season of the popular science program «How Do They Do It?» on Discovery/Science Channel. The taping of the show was made in 2013 and is shown in many countries during 2014. Stressless® is also spotted in the movie "Paddington".

Stressless® City is listed as a winner of Coastal Living's 2015 Design Awards, labeled as "the people, places and things we're celebrating for exceptional seaside style in the year ahead!" Stressless® is in good company with some very luxurious international brands and locations.

The website www.stressless-world.com is launched to provide useful information for Stressless® owners. 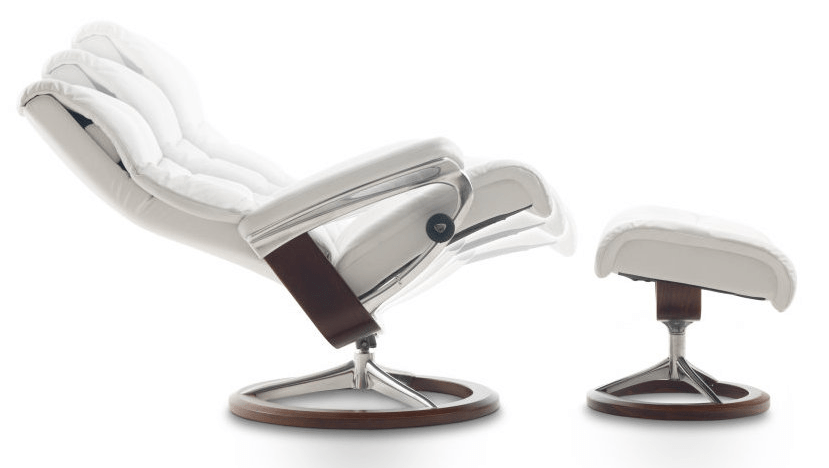 2015:
Stressless® products are endorsed by The Chiropractic Association in Singapore.

The first Stressless® chairs with covers made by an automated sewing robot are delivered. The sewing robot is now operative in the sewing department.

At the annual fair for Scandinavian retailers, Ekornes presents a Stressless® collection that is considerably extended, offering more flexibility and more options. The three-size story is re-introduced on Stressless® chairs, and free choice between the Classic base, the Signature base with BalanceAdapt™ or Home Office base.

The six Stressless® factories and the Stressless® Product Development Department are certified according to the requirements of ISO 9001 (quality) and ISO 14001 (environment).

The Stressless® Dream recliner appears in a scene of the movie "The Intern".

2016:
Stressless® with LegComfort™ is launched. The new electric integrated footrest sets a precedent within industry through its heightened functionality.

Stressless® YOU James recliner is voted "Product of the year" in the chair category by readers of the popular German interior design magazine Wohnidee.

2017:
In January, Stressless® returns to the IMM International Interiors exhibition in Cologne, Germany, for the first time since 2009.

During the spring, Ekornes initiates a wide-ranging eCommerce project for Stressless®, in response to consumers' increasing digitalization.

The Stressless® range is expanded to include a new product concept: Stressless® Dining - shown for the first time at the annual fair for Nordic retailers in November. The functional dining chairs, which adapt to the user's sitting position, prompts a great deal of positive attention.

The Stressless® Crown recliner receives the Consumer's Digest "Best Buy" award. Stressless® also comes out on top in the upholstered furniture category in the "Freundin Markedliebling 2017/2018" survey of brand favourites. Freundin is a German popular magazine, with around 1.9 million readers. 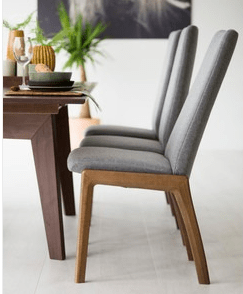 2018:
A new www.stressless.com website is rolled out in several European markets during the year. A dedicated eCommerce department for Stressless® will be responsible for strengthening the company's dialogue with end-users, through greater insight in customers' buying processes and direct digital communications.

The stressless@home app is launched. With the help of the app's augmented reality (AR) technology, you can design your own Stressless® chair and see what it would look like in your own living room.

In competition with 27 other upholstered furniture manufacturers, Stressless® comes first in the large-scale German consumer survey, carried out by Deutsches Institut für Service-Qualität and the news channel n-tv. The survey asks which brands, companies and service providers consumers prefer, and publishes a ranking based on the replies of around 60,000 customers.

2019:
An important milestone is passed in May: 10 million Stressless® seats have been sold since the introduction in 1971.

This is the year of motorization for Stressless® with the introduction of Power™ as an option for many models. The collection is extended with a series of motorized sofas. With new functionality and motor in both the seat and back, these sofas are designed to complement some of the best-selling Stressless® recliners. Models already in the collection are also made available with motor: Stressless® sofas with Plus™-system and Stressless® sofas with the ErgoAdapt™-system. The new and upgraded Power™ functionality replaces the LegComfort™-system for recliners.

A new version of the Stressless® Studio retail concept is introduced and rolled out in all markets. The new studio has a modern Nordic design. It offers a flexible solution that can easily be adapted to sales floors of different sizes and shapes, with defined zones for inspiration, experience and design.

A redesigned version of the Stressless® logo is introduced.